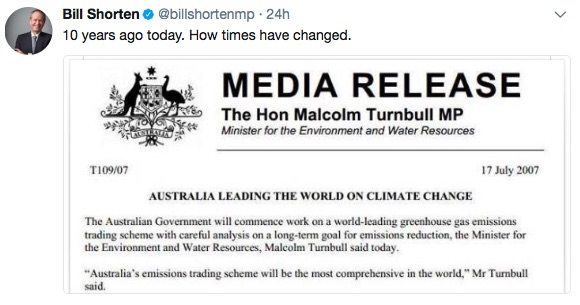 Acknowledge the Gadigal people of the Eora Nation as traditional owners of the land on which we meet.

Hiroo Onoda is not a household name, but when I think about energy and politics, his story is the story of our government in Canberra. Mr Onoda was a Japanese soldier who fought in World War II. He was given instructions not to surrender when he was deployed on an island in the Philippines. True to his commitment, he fought for 29 years after that war had already ended.

He was completely ignorant that the world had already moved on without him.

No one had told Mr Onoda that his people had lost the war so he camped out in the forest making sporadic, but consistent attacks until 1975.

For the last five years, this conference has held sessions and seminars making it abundantly clear that traditional, dirty energy sources cannot out-compete the trajectory of clean energy technologies.

There is no future in coal.

Our gas industry has destroyed itself through greed. We are now seeing international customers pay less for Australian gas than we do.

Our farmers don’t care how big the price on offer is for CSG, they refuse to let their communities be destroyed for short term profits.

There is no long-term future in gas for electricity either.

The politics of clean energy

Through these last five years we have been able to observe a political science experiment.

What happens when the unstoppable force of clean energy collides with the immovable object of the Abbott-Turnbull governments?

Now we know the answer. The unstoppable force wins.

Since 2013, the world has built more clean energy than traditional, dirty power sources. Clean energy and storage has become cheaper by the day, it actually delivers jobs and investment – overwhelmingly to regional areas – and Australian firms and institutions are making amazing leaps and bounds in research and product development.

Meanwhile, the immovable object of the Liberal Party has chained itself to carbon capture and storage fantasies, super critical coal plants and they are joined by the Labor party on the Adani ‘carbon bomb’ coal mine.

No private financier anywhere in the world will support any of these projects being developed in Australia.

They know these investments are a wasteland of sunk costs and stranded assets.

It is only our federal government and Queensland Labor governments willing to put public money into these god-awful ideas.

However the worst aspect of our country pursuing a 19th century industrial agenda is that we are missing all the opportunities that have fallen into our lap.

We have sunshine, wind, massive open spaces and incredible researchers and entrepreneurs’ setting their minds to seize the economic opportunities that rapid decarbonisation offers.

But we are not seizing this future that belongs to us because of the sedimentary layers of uncertainty that your industry is trying to work on.

In the last few years, the key features of this uncertainty have been:

When John Howard stood beside his Environment Minister Malcolm Turnbull in the lead up to the 2007 election, they announced an emissions intensity scheme and a renewable energy target allowing 0.2 tonnes of pollution per megawatt hour.

How far we have fallen that an emissions intensity scheme is the devil’s work and even 0.7 tonnes of pollution is still too low for the Liberal Party Room.

They want new coal to be subsidised through everyone’s electricity bills.

These right-wingers should be overjoyed at how crap Australia’s clean energy ambition is, but they are never satisfied.

This is a key point to note when your industry is negotiating the clean energy target, because any concession your industry makes without getting something in return only

strengthens these backbenchers and weakens your bargaining position. It should be a key warning for the Labor party too.

Kevin Rudd, Julia Gillard as well as former President Obama all believed that giving ground and watering down policies would reduce the ferocity of opposition from these backward-looking conservatives.

They were wrong each time. The conservatives gladly accepted the concessions being offered while keeping their opposition just as resolute.

Indeed, we saw the same pattern play out with the weakening of the renewable energy target two years ago.

You don’t have to always take less than what is being offered. The level of public support for clean energy is massive, you have the public on your side.

The politics of solar and storage are a winner. Australians love innovation, they love clean technologies and they hate traditional power companies.

Solar offers households and businesses an ability to take control of their power bills.

They want to see their energy system democratised and this is what solar, storage, demand management and software like that developed by Australian firms, Reposit Power, Greensync andRedback Technologies are turning hundreds of homes into virtual power stations.

This energy revolution is – both literally and figuratively – reversing the relationship of power. Coal companies and their federal government, don’t like it. But there is nothing they can do to stop it.

You should not ever have to feel politically pressured by governments that take billions in donations from your competitors and live in an ideologically isolated world.

They don’t want your industry to succeed. No matter how concessional or generous your compromises, you can never carry any favour with them.

However, we do clearly acknowledge that you all need policy certainty for your industry to flourish and the Greens have always been committed to securing that certainty.

We are willing to wait and see what shape and form this clean energy target is twisted into by the time it reaches Parliament.

But if what is proposed gives absolutely no certainty to our climate and our country’s pollution profile continues to expand and create runaway global warming and a cooked planet, then there is actually no certainty for any industry, anywhere at all.

We would prefer an expanded RET rather than extending it with coal and gas as is currently proposed, but this policy alone is nowhere near enough.

If certainty is the absolute number one priority for your industry, then there are grave problems with pinning all your hopes on the Clean Energy Target.

All it takes is for one of Tony Abbott’s junior protégés to become energy minister over the next 15 years and they can throw the industry into turmoil again by causing a review, use

some aggressive language and then investments will cease again and your industry will be clamouring for resolution again.

This is a tried and tested re-usable political strategy for these dinosaurs and they won’t be afraid to repeat its use. A clean energy target is very vulnerable to future political uncertainty.

That is why the Greens energy platform, RenewAustralia outlines a suite of mechanisms to deliver industry certainty and transform our economy from one of the dirtiest in the world, to one of the cleanest.

We see the best way to map out future investments is to have a legislated timetable of coal closures, shutting down the most polluting power stations by region so that new investment can be managed and planned for, over the next 15 years.

So these should be part of the mix of mechanisms to encourage specific projects using specific technologies to generate skills and employment in those critical regions.

Reinvesting the money that was stolen from Arena to continue encouraging research and development, supporting the CEFC and of course the unspoken policy gold mine of energy

efficiency should also be front and centre of national policy if government’s were serious about reducing energy prices for households and businesses.

We in this room all know that the government’s calculated plan to create uncertainty has driven up power prices. The lack of any long term investment signal will keep prices rising above CPI. Research by my colleague Adam Bandt showed that wholesale prices have doubled since the carbon price has been repealed.

The deceitful debate around clean energy driving up power prices has been completely unhinged from facts. As the Clean Energy Council has demonstrated, Queensland, Victoria and NSW have seen the largest increases in power bills over the last decade despite having the smallest increase in clean energy generation over the same period.

The rise in electricity bills has overwhelmingly been created from policy uncertainty and networks gaming a rigged system – two of the biggest issues never talked about.

That is why it was encouraging to see the federal government yesterday putting pressure on the Queensland government’s network businesses. My predecessor Christine Milne worked tirelessly to expose the flagrant rorts with our network pricing regime.

It has been very hard for us to get any traction on an issue that is so complex and intentionally clandestine, so I am hopeful that calling out Queensland for using its network businesses to raise revenue may lead to positive change in what has always been a wink and a nod between governments wanting to squeeze their constituents for revenue without them knowing about it.

But the immediate question is why isn’t the exact same behaviour in NSW by a Liberal government not also called out and attacked by the Turnbull government?

These state entities are generating returns on investment ten-times-greater than the big four banks. If that doesn’t signify that our electricity market is broken, then what does?

Our electricity market was built in the hey-day of 1990’s competition policy zeal. Our energy market is not geared to encouraging smarter energy use or reducing pollution – the two keys to our country’s future.

We leave the market unchanged at our peril, that is why , while the devil will be in the detail, we are very positive about many of the proposals in the Finkel review.

The energy market rules have stood still while technology has completely transformed around it.

We want to see our energy system modernised so that those brilliant Australian firms developing cutting edge technologies that we can export to the world are fostered and encouraged, not marginalised and developed overseas instead.

We have some amazing potential to quite literally change the world, here is a snapshot of some of the exciting work being done at this point in time:

There truly is no limit to what your industry can achieve. It is a very exciting time to be watching the energy industry.

There is a technological revolution happening and yet only those paying attention know how significant today’s leaps and bounds are to creating new, clean societies that can prosper with a biosphere below 1.5 degrees of increased temperatures.

On behalf of the Australian Greens I want to sincerely thank you all for your work.

We will continue (as we always have) to support the advancement of your industry and we will never stop advocating for a more ambitious political environment for you to flourish in.

Is your finance choice eating up your savings in solar power?