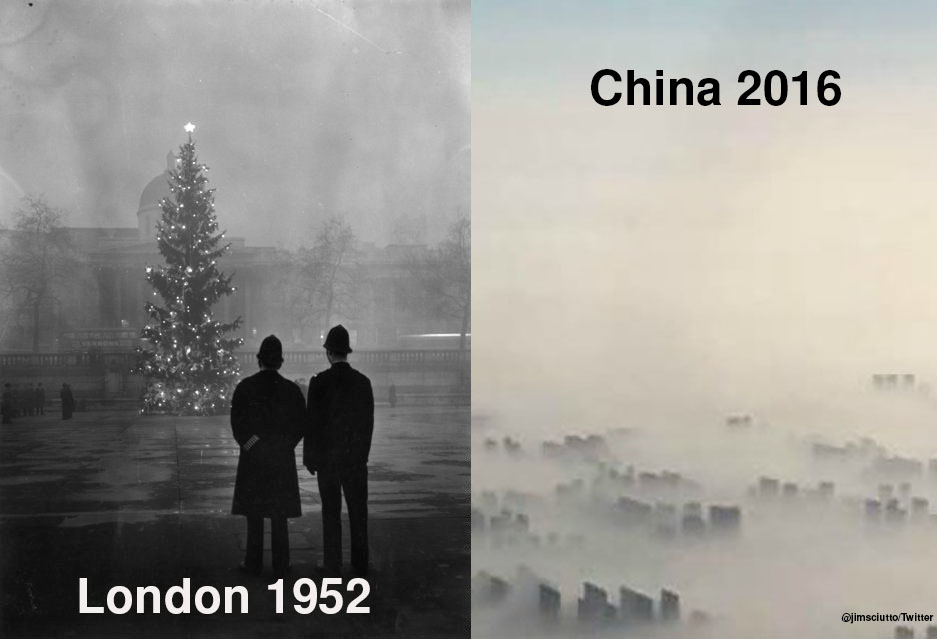 Recent pictures of the great smog events in China reminded me of the Great London Smog from the 5th to the 9th of December 1952.

While the London smog finally dispersed, in those five days 4,000 people died as a direct result of the smog and, according to recent research up to 8,000 more deaths may be directly attributed to this event. In addition up to 200,000 people received mild to severe respiratory injuries. Mortality remained elevated for months after the fog. Perhaps we will never know the impact of the smog in China, however, I am sure it is similarly devastating to those living through it and the rapid response from Chinese authorities tells me they see making changes critical.

The London smog came about as a unique combination of weather patterns and pollutants, mainly coal. One of the key contributors to the pollution were the numerous coal-fired power stations located in the Greater London area, including Fulham, Battersea, Bankside and Kingston upon Thames.

Although London was accustomed to heavy fogs, this one was denser and longer-lasting than any previous fog. The smog was so bad public transport ceased, apart from the London Underground; and the ambulance service stopped functioning, forcing users to transport themselves to hospital. The smog even seeped indoors, resulting in the cancellation or abandonment of concerts and film screenings as visibility decreased in large enclosed spaces, and stages and screens became harder to see from the seats. Outdoor sports events were also affected.

Environmental legislation since the 1952 smog led to the virtual elimination of thick smog. This legislation prompted included plans to convert city based generation plants away from coal or moving them to the country, incentives for residents to stop burning coal and use cleaner alternatives such as gas and electricity. It also led to the UK building and operating 15 nuclear power stations which, thankfully, Australia will not be using. The last significant smog event in London occurred in December 1962.

Atmospheric scientists at Texas A&M University investigating the haze of polluted air in Beijing realised their research led to a possible cause for the London event in 1952. “By examining conditions in China and experimenting in a lab, the scientists suggest that a combination of weather patterns and chemistry could have caused London’s fog to turn into a haze of concentrated sulphuric acid.”(1)

The two events are not identical. In China, the combination of nitrous dioxide and sulphur dioxide, both produced by burning coal, with a humid atmosphere, created sulphates that made the atmosphere highly acidic. However, ammonia from agricultural activity has helped neutralise the acid, something missing from the London scenario.

Could this happen again? Yes, if the right meteorological and pollutants combine. The London scenario shows there is a direct relationship between combustible pollutants and weather so, with the relocation of power stations to the country and, better still, production of energy from solar hopefully these events will eventually become a thing of the past.