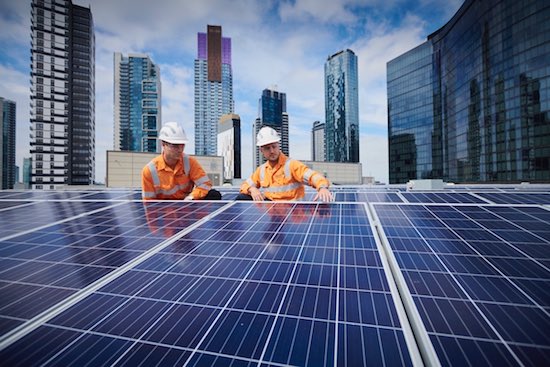 Melbourne’s Crown complex, which includes the landmark riverside casino and hotel, has installed a 300kW rooftop solar system, in an effort to cut its electricity costs and “boost its clean energy credentials.”

The system, designed and installed by Beon Energy Solutions and switched on in January, is being claimed as the largest in the Melbourne CBD, but One Step notes that a 400kW array was installed on the Port Melbourne roof of NextDC’s HQ in December 2013.

And given that was nearly five years ago – and in light of our own experience in publishing claims of “biggests” and “firsts” – there are bound to be others of a similar size we aren’t aware of (please comment below if you happen to know of any).

That said, the new Crown system – a total of 923 photovoltaic panels installed on top of the Southbank venue’s administration building on north-orientated 10-degree tilt frames – is nonetheless impressive.

And it adds to a growing number of commercial scale PV projects being installed in the Melbourne CBD – which according to a recent report, still holds a significant amount of untapped rooftop solar potential.

The report, published by the Australian Photovoltaic Institute (APVI) in conjunction with the University of NSW, identified enough suitable rooftop space in the Melbourne local government area to install a total of 461MW of PV.

And it said businesses in Melbourne’s CBD could meet more than 12 percent of their own electricity needs – and cut their collective power costs by more than $100 million – just by tapping the city’s true rooftop solar potential.

Ironically, Crown Casino was named in that same report – alongside the MCG and Flinders Street Station – as one of the city’s landmark buildings that had the potential to go solar.

“Crown has been looking at solar options for a while, and the business case for a solar installation made sense,” said Crown Melbourne engineering manager Jeremy Sampson in comments on Tuesday.

“Crown chooses projects that are guaranteed to provide positive value, and it was the right decision to proceed.”

“As with all our customers, the Crown project required some customisations that we managed to accommodate swiftly,” he said.

“I applaud Crown’s renewable energy initiative and I have no doubt that other energy-intensive sectors will be watching with interest as they weigh up their future energy requirements.”

Contact ASM to discuss how you can build your business.

Is your finance choice eating up your savings in solar power?